Note: this is the first of a three part blog entry. It deals with the unwarranted problems I have had when attempting to teach foraging. The second and third parts will explain why foraging is, in fact, environmentally friendly.

I have always thought that righteous indignation should be the eighth deadly sin. It is enjoyable at an almost sensual level and self-indulgent to the point of indecency. The recent conviction of several people for picking mushrooms in Epping Forest provided me with enough righteous indignation to launch a space probe, but it was not the treatment received by the convicted that gave me the opportunity to indulge myself, it was the attitude of their accusers and their behaviour towards me.

For some reason I was partly blamed for the Epping Forest debacle even though I have never been there and not even too sure where it is. I first became aware of the matter when I came across a handful of newspaper articles inspired by a press release from some Epping Forest rangers. A typical headline was “Forest mushroom frenzy after Hugh Fearnley-Whittingstall's 'free' food drive” from the London Evening Standard, with similar articles published in a local paper and the Telegraph. I got a mention at the bottom of the page. The headlines tell it all. Hugh and I were responsible for encouraging people to break the law and trash the countryside.

I called the ranger’s office and asked a nice fellow who was more a “foot-soldier” ranger who told me that about 90% of those caught were from Eastern Europe – he was a bit vague and I gained the impression that he meant 100% but didn’t like to say. People from these countries are famous for their foraging expertise (something I have spent years encouraging in the Brits) and, evidently, not too bothered about the numerous notices telling them that picking was forbidden in Epping Forest under a by-law. What they were not were people born into native British culture who had been encouraged by irresponsible books and television programmes. I wrote to the rangers who issued the press release pointing this out only to be faced with a brick wall of denial. I was suffering from righteous indignation fatigue by this point and pursued the matter no further.

I have had endless encounters of this nature. The Telegraph had a go at me when my Edible Seashore book was published. (They called it Hugh’s book, something which annoyed me even more because it was me what wrote it). The article did not cause much of a stir, but I was asked for an interview on a radio station. I was expecting a trap and one was duly sprung when, half way through the live interview, the presenter introduced a chap from the National Trust. Fortunately you get a bit cute about this sort of thing and I had defused it early on with mentions of conservation. Not that I was being cynical – conservation is something I feel very, very strongly about.

Possibly my worst run-in with ill-informed criticism came at the hand of the Association of British Fungus Groups and of others. I obtained permission from the National Trust to take River Cottage fungus forays at a location in West Dorset. Everything went well (or so I thought) until the next year when I asked again for permission and was summarily refused. Evidently complaints had been received by the NT about my activities and the refusal was accompanied by references to concerns expressed by the ABFG, Natural England and the NT itself. Astonishingly, at some point the police had been called but, presumably having better things to do, they refused to act and I did not get to enjoy my day in court. A number of myths have accrued round this: clandestine forays onto a neighbouring farmer’s land, mysterious back entrances, phantom tv crews and our party going equipped with halberds to knock fungi off of trees. The general impression given by my accusers was that River Cottage had gone to an SSSI and stripped it bare. Nothing could be further from the truth.

The odd thing about this sad tale is that no-one ever asked me what we actually did, they just published their complaints in newsletters and in forums.

Occasionally when taking a mushroom or other foray I am accosted by irate individuals accusing me of defiling the countryside. Nature conservation is at the very heart of what I do and to hear it characterised as otherwise is very upsetting. Many people fail to understand the relationship between a sensible forager and the natural world and seem to fail to understand the natural world at all. Despite my polite explanations, they glow with the same righteous indignation shared by all my critics and, their harsh words ringing in my ears, I retire to a consoling cup of the same brew. 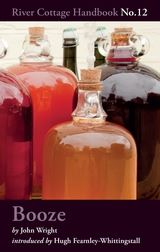